Welcome to the new home of Mt. Rainier Futbol Club!

MRFC’s Recreational Soccer Program offers players, coaches, referees, and families an opportunity to participate in a fun and safe team soccer experience. MRFC strives to provide an enjoyable environment for children to learn and develop fundamental soccer and life skills.

We invite players, coaches, and families to enjoy their soccer experience and hope to provide opportunities for all involved to acquire love and passion for the game and lifelong memories.

Thank you for coaching! You are doing something wonderful for your community and we greatly appreciate you.This page serves as a resource to help you provide the best opportunity possible to the children in your care.

Steps to Being a Great Coach

BE A Good Human

Care for your players. They are young and need your help. They will make mistakes and sometimes be in bad moods. Everyone has bad days. You can coach them through all of these challenges with your positive example.

Wanting to win isn’t evil. Determining the value of a person depending on whether they win or lose is. Competition in the correct mindset can be a powerful tool for personal development and growth at any age.

Take your commitment to the children seriously rather than yourself. 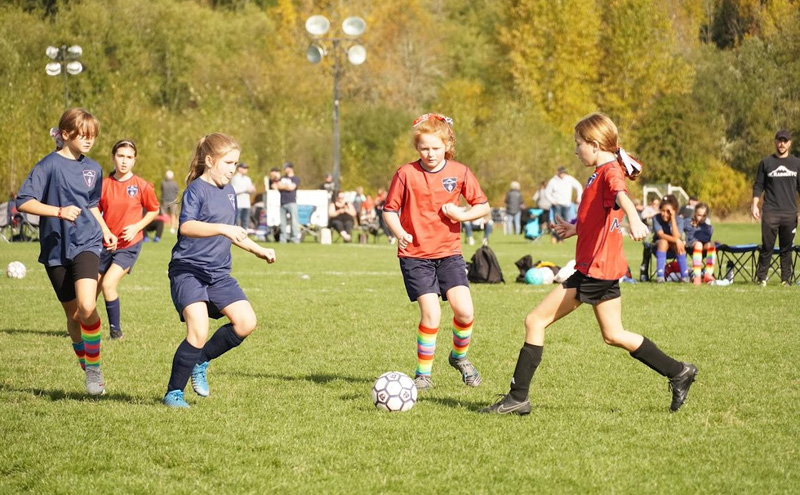 FIFA Rules of the Game will be applied except where, modified as follows:

Note: The ball is “in play” once it is kicked on goal kicks, or the ball has been released from the goalkeeper’s hands. If the opposition team crosses the build out line prior to ball “in-play”, the goal kick is retaken.

Off-sides will be called. The build out line will be used in determination of offsides rather than using the midfield line. Players between centerline and build out line are not to be considered as off-side.

FIFA Rules of the Game will be applied except where modified as follows:

FIFA Rules of the Game will be applied except where modified as follows:

Unlike other sports, Soccer is governed by laws of the game and not rules. This means that these rules can be subjective, and any the final decision made on a game day is down to the referee’s discretion and should be accepted by, Coaches, Players, and Families. Anyone see or heard to be in violation of our game day code of conduct may be asked to leave the sideline and watch from their vehicle.

The home team will be responsible for providing referees. In the event that a referee is not present, both coaches will mutually agree upon one. If one cannot be agreed upon, each coach will referee one-half. Assistant Referees may be used whenever possible to assist the referee.

What is Recreational Soccer?

Recreational soccer is a soccer program that is primarily devoted to the enjoyment and development of soccer players without the emphasis on travel or high-level competition. Recreational leagues are often the first experience of soccer for many players.

Research shows that participating in youth sports can lead to immediate and long-term benefits for youth, their families, and communities. Team sports help teach adolescents accountability, dedication, leadership, and other key life skills.

When do we play?

MRFC currently has both Spring (Mar/Apr) and Fall (Aug/Sept/Oct) Leagues. Teams train twice a week and play on Saturday mornings.

Where do we play?

Our Recreational leagues train and play out of Kelley Farms Soccer Fields in Bonney Lake.

Who are our coaches?

Many of our coaches are family volunteers. Experience from coach to coach is varied, but the club provides safeguarding and coach education to all. Coaches also have access to a diluted version of our club’s Premier player curriculum. While our coaches are not professional, they are committed and care about the players involved across the whole program.

What kit do players need?

Players will receive 1 Red training top and 1 team-colored game jersey. Players are asked to provide their own card shorts and socks. These items and more are available on the Mt. Rainier Apparel store.